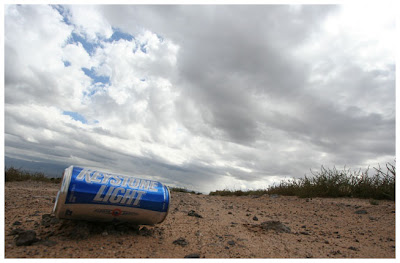 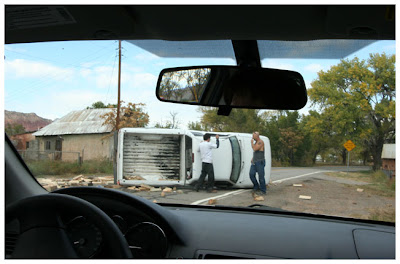 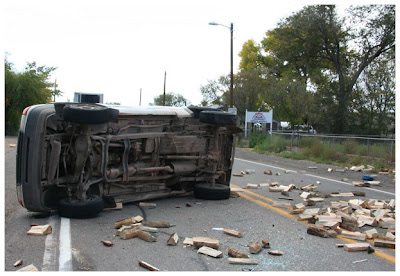 Some of the names in this blog have been changed to protect the innocent, ambivalent and or righteous.

So, the wife (Diane) and I went to and stayed with some old friends. With the hubby at work and the little one in school, my buddy... let's call her Mary, was freed up to show us around! One of our excursions involved heading to a scenic area in the .

Mary was driving since she knew the area… and has always been a little leery of my driving. You see, she was my reporter and I her photog back in the days when we ran the Investigative Unit for the TV station we both worked at. She usually drove so I was the one that would be hanging on white knuckled as she would say… “Watch this… here’s a little sumpthin’ my ex taught me…” or.. “I saw this in a cartoon once!”

So there we were in mine and the wife’s rental… Shortly after we turned from the main road to another not so main road, we came upon ten or so cars stopped in traffic. This came as a surprise since although we had seen a few signs that said “Congested Area” and “Drink Carefully!” this was the first time we had actually seen any traffic during this particular trip.

Priscilla… oops! My bad! I mean Mary decided she did not want to wait for the traffic to clear so she started to ride along on the narrow shoulder as I kept reminding her “Rental! Rental!” When we got around the other cars we could finally see what the hold up was. A pick-up truck had turned over on its side and its load of split wood was spread out all over the road. There were a couple of people out in the middle of the mess appearing to be trying to clear the way. I got out to help as well, figuring the faster we cleared the way, the faster we would be on our way.

After finding out no one had been hurt, I noticed one of the wood clearers was not doing a particularly good job. This was apparently the driver and he was shit-faced. Lets call him Cletis. His condition was quite understandable since it was shortly after the noon hour and hey, that’s hard work hauling wood! Anyway, Cletis would pick up a piece of wood and throw it anywhere. Half the time, back in to the pile he was trying to clear. He was also doing a lot of swearing and belly-aching and stumbling, when the other guy, a big bruiser that we’ll call Duke, made a comment that maybe this wouldn’t have happened if Cletis wasn’t so plastered.

Cletis looked up. You could barely see his eyes because they were half shut and very red. He squints in our general direction and says something rather disparaging concerning sexual preferences. I turned to Duke and said that I thought one of us had been insulted. Duke said he was pretty sure it was him. Now looking at Duke, he was about the last guy you would want to call an Effing Fa---t! Duke looked like he could crush Cletis like a tin can.

Cletis was now swearing and raving and making semi threatening gestures as he was holding his piece of wood like a club. I suggested to Duke that maybe we shouldn’t get him riled up while he had a potential weapon (though he probably would have fallen over if he had attempted to use it). At Duke’s mention of the police, Cletis dropped the wood and started looking for cover. He walked up to what looked like abandoned or run down houses as he looked for refuge. Duke asked me to keep an eye out for the cops as he kept an eye on Cletis and followed him around as we stumbled on a rickety porch attached to an old house that did not face the road.

I went back to the car and Pris, I mean Mary said, “C’mon! Let’s get going!” I explained that it was my duty to wait for the cops and assist Duke in apprehending this ne'er-do-well. Pris said that they were already here and waved her hand vaguely in some nondescript direction. I looked around but didn’t see any cops. I made sure that Duke and Cletis were still in my sites and I looked up and down the road for the police. Most folks were still in there cars. There did appear to be a couple of paramedic types, but they were just leaning against their vehicle enjoying the show.

I went back to the car and was again assured by Pris that they were here. This time she kind of pointed in front of her. Again, I saw nothing. I rolled my eyes, got in the car and hoped my new best friend, Duke, could handle the situation. A few minutes later we saw two cop cars whiz by us. “See, there they are!” Pris exclaimed.

For the rest of the day, I told Pris that I was disappointed in her and that Justice was my middle name. Of course that is not my real middle name since it had been changed to protect the righteous!

Anyhow, we did manage to see some beautiful sights and were back home just in time to pick up Pris’s (ok, I gave up on Mary) daughter from school. I’m sure Duke would understand.

Pix from the trip should be up soon at...

Posted by Ric Easton at 8:43 PM No comments: 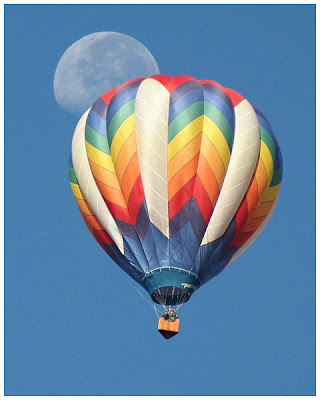 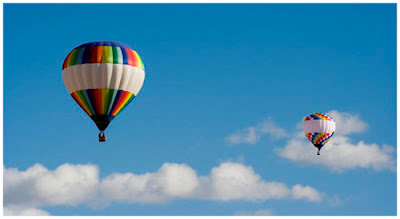 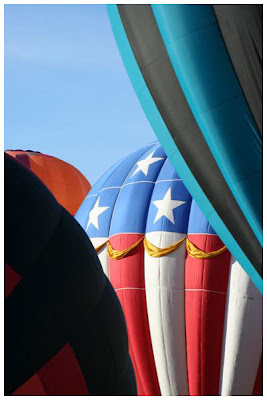 Well, after the disappointing experience at the Adirondack Balloon Fest last month, the second time turned out to be the charm! This time we did it right... Headed down to Albuquerque for their annual Balloon Fiesta and had a great time. The weather was perfect (though a little chilly at 5am!) and we were treated to some amazing sights. Hundreds of hot air balloons took to the skies in what is known as the biggest balloon event in the world! It was very eerie being there at 5:30 in the morning, in complete darkness, with thousands of other folks. On Saturday (the busier of the two days we went) it was like the population of a small city as folks set up their lawn chairs and ate breakfast burritos from one of the many vendors that were up and running. One of the big highlights was the "Special Shapes Rodeo" where balloons came in all shapes and sizes. One of the most popular was a big giant Darth Vader head! News reports had stated that Darth made it to the Fiesta just in time after being held up in some shipping debacle in China!

Our only concern was that traffic was so heavy getting out of there on Saturday morning, that we were worried we would miss our flight back home! As we were sitting there stopped dead in the parking lot, I looked longingly at the balloons still in the sky, unencumbered by traffic jams! Of course they have to go where the wind takes them.

We also toured around some other places in and around Albuquerque and I'll have plenty of new shots on the website shortly. In the meantime, if you are on Facebook, you can check out some of the pix of the Balloon Fiesta right here! I'll be back soon with another story or two of the trip. For now... vacation is over and its back to work tomorrow. Ugh!


www.RixFotos.com
Posted by Ric Easton at 11:06 PM No comments: