Thursday morning I got up at about 5:30 and headed out to shoot my final Arch.  Mesa Arch is actually in the nearby Canyonlands National Park and I had heard it was a good subject for sunrises.

When I got to the parking area at the trail-head, the lot was already full of cars.  I guess other folks had heard about it too!  It was a short 15 minute walk to the arch and when I arrived, there were already a bunch of photographers that had staked out their claims with their tripods.  After asking, I was able to squeeze in between two of them to get my shots.  Unlike Delicate Arch, there wasn’t going to be any moving around for different angles.  Mesa Arch is also a lot smaller. As a matter of fact all of the photographers were planted right up next to it, so close you could touch it.  This was so they could get the angle of the sun coming up.  As the morning got brighter the under side of the arch began to glow with the warm reflection of the daylight. 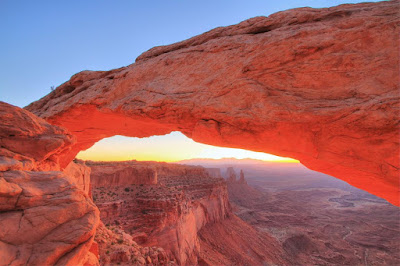 I put on my wide 10-22mm lens and hoped for the best.  Luckily, I was able to get most of the entire arch in the shot.  Some latecomers weren’t so lucky.  One suggested, “Hey guys, if we all back up 10 feet we can all get the shot and get the whole arch.”

The guy next to me said, “You’re high, Dude!  We ain’t moving.”  These guys were hardcore.  He showed the guy that made the suggestion that he was able to get the whole thing in his viewfinder and suggested to the fellow that next time he may want to come with the right gear.  Ouch.

Another guy toward the back was setting off his flash and quickly got scolded, “Hey, quit with the flashes!  Some of us are doing time-lapse, Dude!”

“Dude” seemed to be the proper way of addressing someone during this outing.

Anyway, as they counted down the minutes to the sunrise another latecomer decided he could plant his tripod right next to mine.  His camera was about 2 inches away and it was difficult for me to even adjust the controls on my own camera.  I was also worried that with all his futzing around so close to me, he would knock my camera and tripod over the edge and into the abyss on the other side of the arch.  He was Asian and did not seem to be able to speak English, so I just gave him a dirty look.  I took some pre dawn shots then switched to a brand new card (with some difficulty because of the cramped space) since the one I was using was getting close to full.

The sun came up.  We all got our shots… Then I ran into a bit of trouble.

My camera was stuck in a “busy” mode.  Kind of like when it’s processing an image by adding noise reduction, but it wouldn’t stop.  I tried shutting the camera off, but to no avail.  The camera was still stuck in its processing mode.  Could the brand new card be faulty?  I was at my wit’s end.  I asked the crowd if they had any suggestions.  The only thing to do seemed to be to eject the card or the battery.  Either option could corrupt the data on the card, losing all the shots.  It was finally decided after about 5 more minutes that popping out the battery would be the lesser of two evils.  I took the camera off the tripod, clicked the lid open, and just before I hit eject, the camera ended its busy mode and was once again working.

Relieved, that all was well, after checking the pictures, I took a few shots hand held and then went to put my camera back on the tripod.  The Asian guy that had been invading my personal space had moved my tripod!  “Not cool, DUDE!” I exclaimed.

I got a “So sorry” in response.  The sun was getting higher the moment had passed.  At least I got my sunrise shot.  I took some shots of the thinning crowd and then headed back to camp, where I packed up and started the long drive back toward the Vegas airport where I would be flying out of the following day. 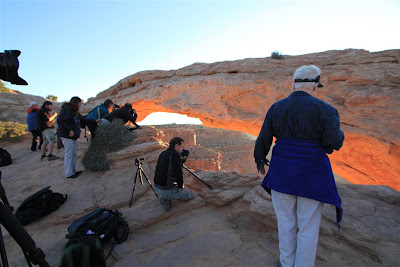 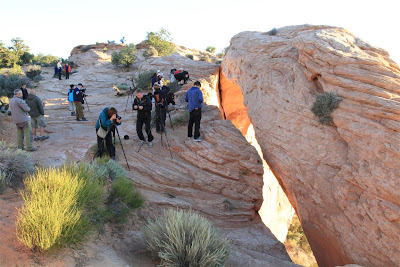 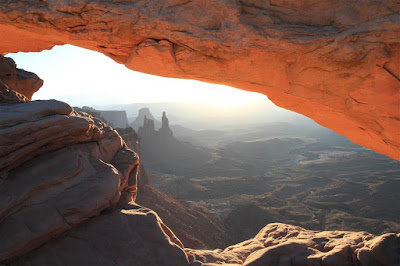 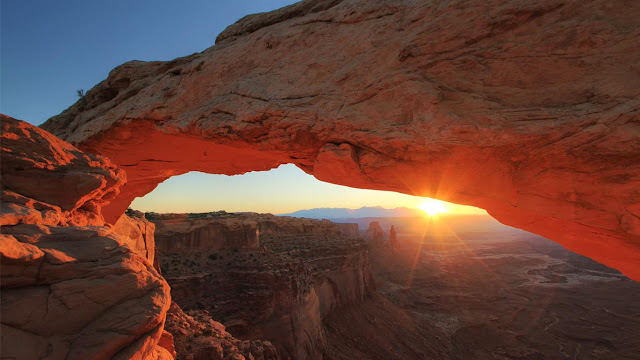