Surviving the Summer of Hell

For my day job, I, along with some of my WTEN cohorts have been sentenced to covering all 6 plus weeks at the Saratoga Race Course' 2011 season. Everyday we come up with track related stories for the news and have to be done in time to man the cameras for LIVE coverage from 4 to the end of the news at 6:30.

Last week leading up to opening day, we dealt with a heat wave with hot and humid temps well into the 90s. We got to conclude our first official week with a heavy downpour. Most work days have ended up being between 10-12 hours long and sometimes I actually forget what day of the week it actually is! Its like the hot and sweaty version of Groundhog Day, except in the movie Bill Murray awoke every day to Sonny and Cher singing "I Got You Babe." At the track, they play Billy Joel's "New York State of Mind" at the end of the final race, usually about the time we are getting for our last LIVE hit. This will go on until the track closes for the season on Labor Day, which right now, seems an incredibly long way off. Thank God for the overtime which will help pay for a 2 week vacation I have coming up toward the end of September. Right now, I just have to survive until then! 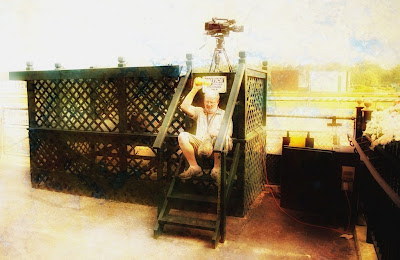 Shot taken by intrepid reporter Christine O'Donnell of Ric Easton trying to stay cool at his camera perch
Anyway, to try and keep my sanity throughout this seemingly endless gig, I am grabbing my DSLR and snapping shots whenever I get a free minute. Hopefully, every once in awhile, I'll get something pretty good.

The best shot of this first full week of racing is from under the rail during Wednesday's first race. Since photographers are not allowed right next to the rail during a race, I set the camera on a small tripod and had to use a remote trigger to fire off the shot. Went with my wide 10-22 lens to get the rail in the shot. Here it is... 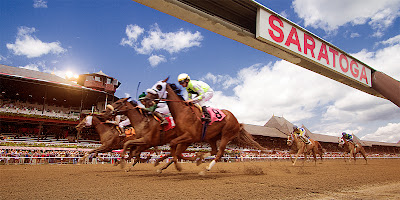 It was pretty much hit or miss, there were a lot of shots with horses either just leaving or entering the frame. This was one of the few that seemed framed perfectly. I do wish the horses and the jockeys were a little sharper. I probably should have gone for a faster shutter speed, as 1/400th of a second may not have been enough!
Posted by Ric Easton at 4:37 PM No comments:

Spent all week up at the Saratoga Race Track (for my real job as a videographer for News 10). It was a HOT week.  Temps in the 90s, 3 days in a row.  Expected to be there again today.

Anyway, a lot of folks were working in the heat, getting things ready for yesterday's Opening Day.  These painters had been touching up the infield and had finally called it quits at about 3 in the afternoon on Thursday... 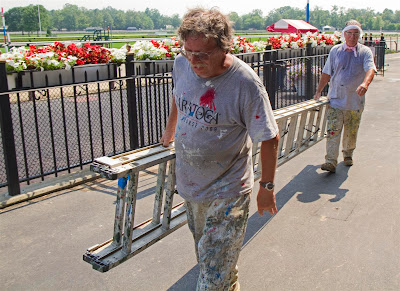 What I found fascinating was their truck.  Old, rusted and paint speckled, it was a thing of beauty... 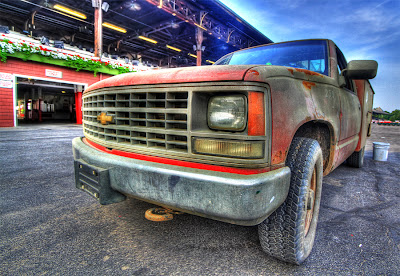 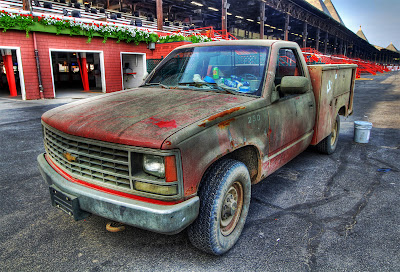 I had actually wanted to get a shot of the 2 guys with the truck, but they were not really in the mood to pose for pictures.  So I settled for reporter Christine O'Donnell and Sports Anchor, Drew Brill! 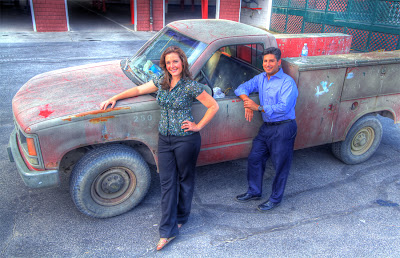 Click on any of the pix for a bigger view!
Check out the main site at www.RixFotos.com
"Like" the Facebook page here!
Posted by Ric Easton at 10:07 AM No comments:

Well, the 2011 season at the track is still a couple of weeks away, but me and my pal, John Nilsen of John Nilsen Studios headed up to get some pix.  We were up there on Saturday afternoon scoping things out in and around the town and track and returned before sunrise this morning to get the horses on their early morning workout.

Took some HDR pix of the track as the sun was coming up and I'm amazed at some of the colors that show up.  Some of which don't seem to go together.  Maybe its time to back off and go for a more naturalistic approach.  Anyway, here's a sampling and don't forget to check out John's stuff right here! 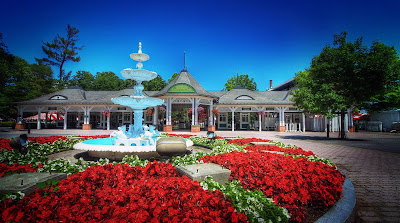 One of the main gates at the Track 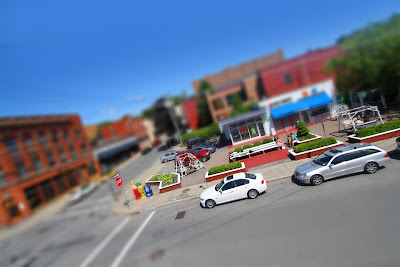 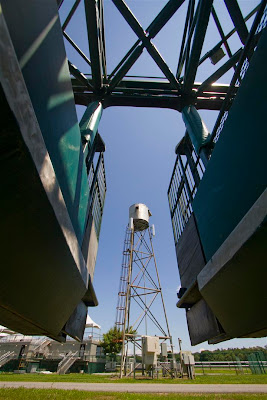 Here, I'm on the ground looking up through the starting gate at one of the camera towers at the track. 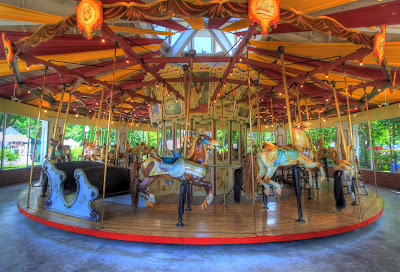 The Carousel at Congress Park 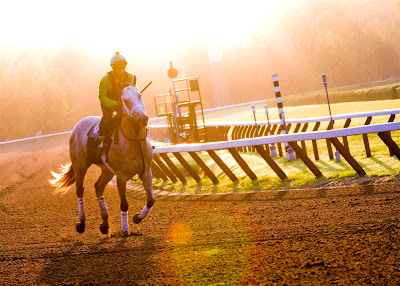 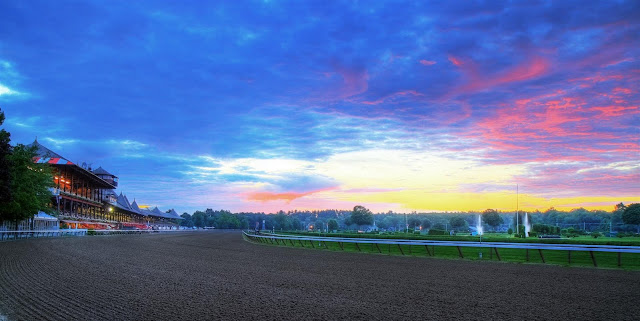 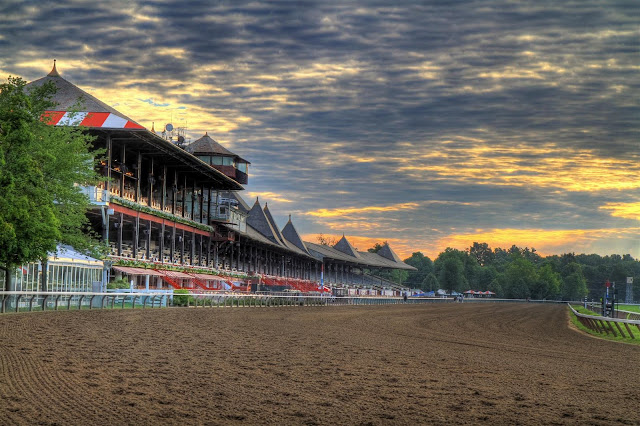 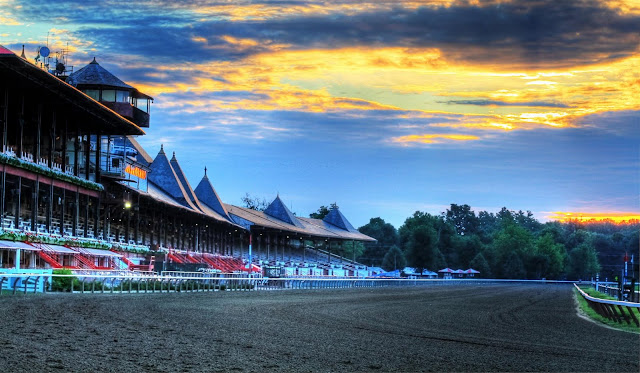 Posted by Ric Easton at 5:39 PM No comments:

The day after the big fireworks party on the Plaza, all was calm and quiet as the sun headed down.  Knocked off a couple of shots with the wide angle lens, gave it a little HDR treatment with Photomatix and got rid of some bothersome lens flare in Photoshop. 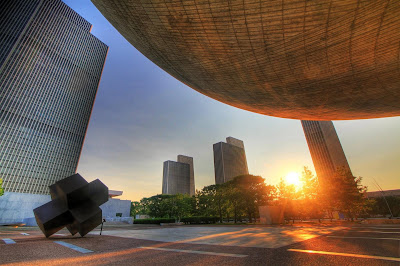 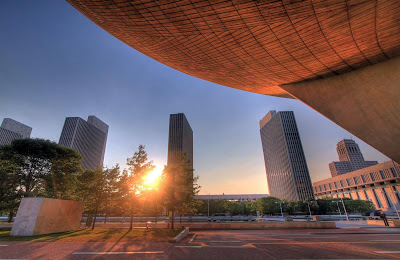 Posted by Ric Easton at 8:31 AM No comments: 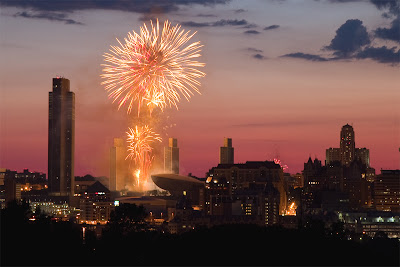 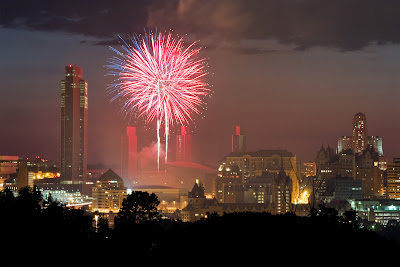 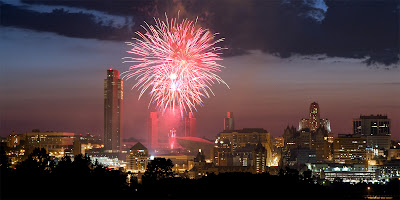 Every 4th of July, I try to find a different spot to take shots of the amazing fireworks display at Empire State Plaza.  This year a couple of my potential locations fell through (could not get on top of the buildings I wanted to!) and I was thinking of skipping the shoot.  However, yesterday, I decided that I really didn't want to miss this once a year event.  So after work (yes, I had to work yesterday), I started scrambling.

As I was crossing over the Hudson River into Rensselaer, I noticed the bridge work that was being done and one of the lanes was closed.  I swung over into the closed lane, got out of the car and had a pretty decent view.  However, it seemed like a fairly dangerous location and with folks rubbernecking, they might not have noticed me.  There was also a good chance that the cops would have spotted me and kicked me out.  Somewhat regretfully, I rejected the location.

After checking out some other spots from across the river I headed further up into Rensselaer and came across some folks that had an amazing view of the Plaza. I had actually taken a skyline shot from there almost 20 years ago, before there were any houses. Its such a great view that every year they host a Fourth of July viewing party with their friends and family.  They graciously granted me permission to set up and shoot the show!  I'm not gonna reveal the exact location, because I'm sure they think their annual 4th blowout is big enough!  But, I just wanted to say thank you for letting me crash your party!  Oh, and I owe you an enlargement of your favorite shot!

Click on any of the photos above for a bigger view!
Posted by Ric Easton at 10:13 AM No comments: